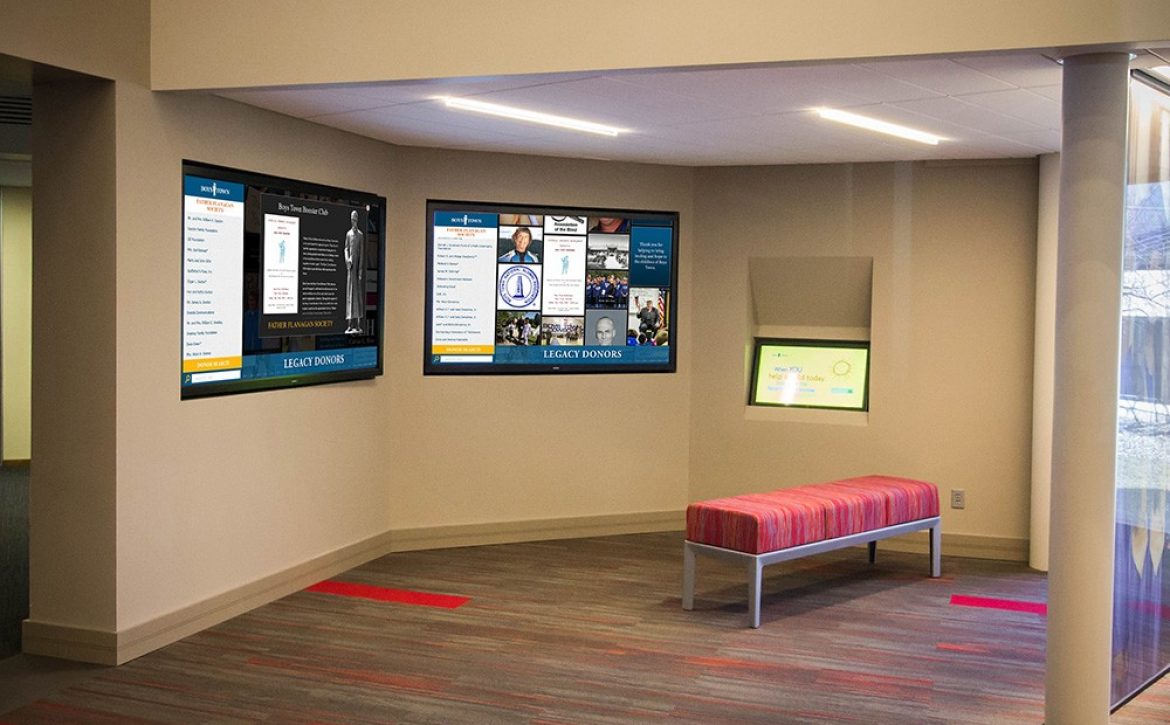 Boys Town, a 100-year-old organization which helps at-risk children and families, needed a way to recognize its thousands of donors in its Hall of History Museum. The exhibit needed to be organized, searchable, and easily updated. And while most donor exhibits are either dull and lifeless, or attractive but hard to update, Boys Town wanted the best of both worlds.

END_OF_DOCUMENT_TOKEN_TO_BE_REPLACED 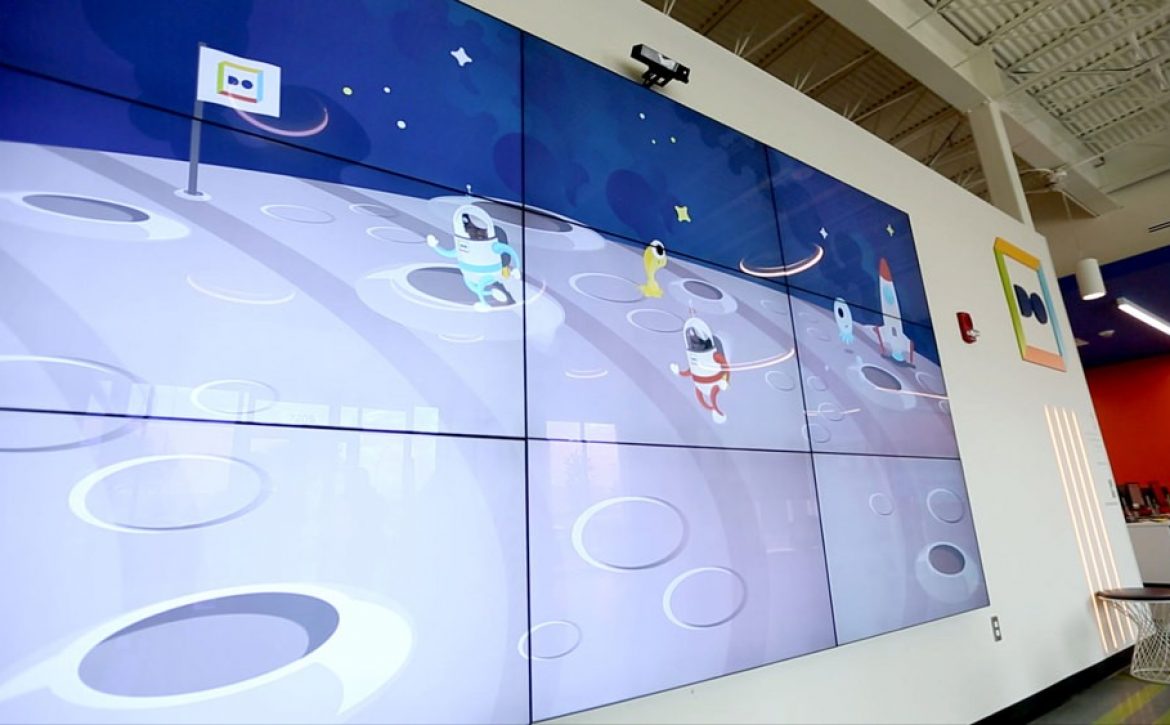 Do Space is a digital library whose primary goal is to put technology in the hands of everyone, for free. The team at Do Space wanted to create an inviting experience that helps put guests at ease as they walk through the door. Because let’s face it, high tech spaces can be intimidating for people who aren’t tech-savvy.

END_OF_DOCUMENT_TOKEN_TO_BE_REPLACED 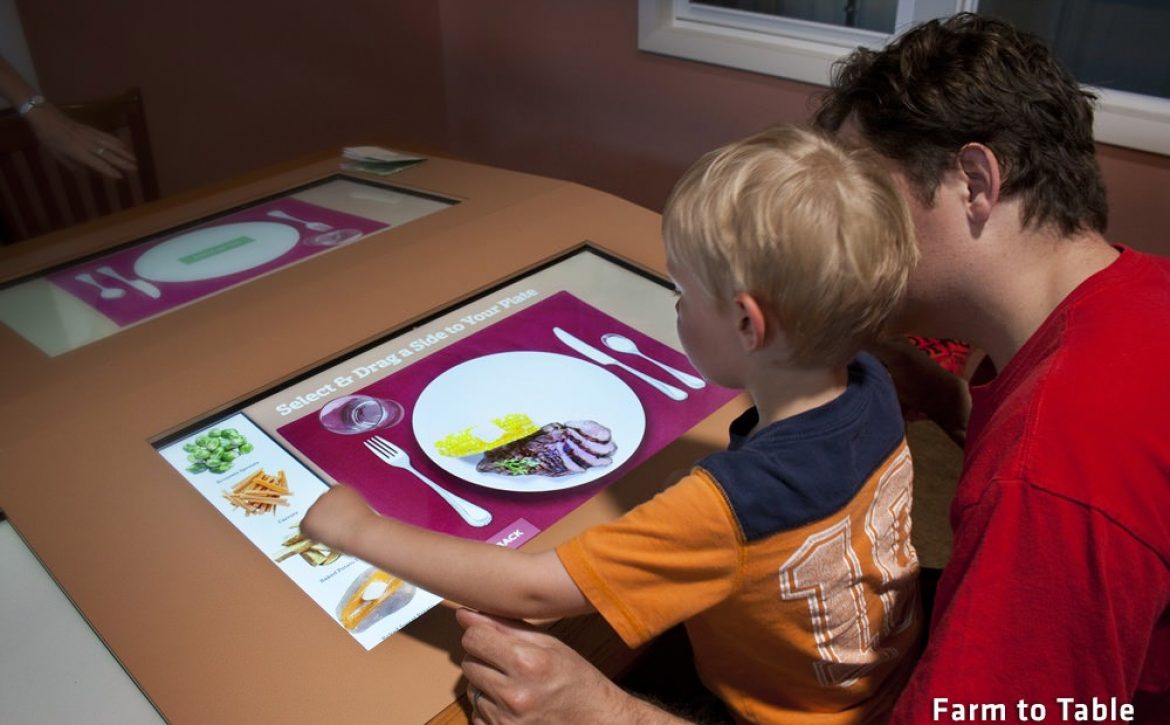 As an attraction and education center, Raising Nebraska’s mission is to educate visitors about the importance of agriculture in the State of Nebraska. Each exhibit teaches visitors how agriculture combats hunger issues and helps people learn more about where their meals originate. As part of the process, they teach visitors about soil, crops, farming techniques, and other aspects of the process of getting food from the farms to our forks.

The major challenge of the project as a whole was bringing a very earthy subject into a very digital world. Much of the annual audience visiting Raising Nebraska are members of a generation in which interactive is a given in their everyday life. Nanonation and the project stakeholders were challenged with identifying digital methodologies that were intuitive, repeatable, and delivered educational content. Ultimately, Nanonation created twelve separate applications to help create a fun environment for visitors and teach them something in the process.

One of the most interesting challenges for Nanonation was the task of finding an interactive way to teach visitors about Variable Rate Irrigation. If you don’t know what VRI is all about, you’re not alone. Nobody at Nanonation knew what Variable Rate Irrigation (VRI) was when we started. Essentially, VRI is the ability to change the speed of a center pivot sprinkler system to apply water at different depths to more efficiently irrigate crops. What we learned very quickly is something that the team at Raising Nebraska already recognized – this wasn’t going to be a simple task!

The old way of conveying information about a topic like this in a museum or visitor center is to have a big red button next to a video player that, when pressed, would launch a video of someone explaining how it works for 90-180 seconds. Perhaps there would be another big red button that would launch a miniature replica of a center pivot to move around a miniature field under a little glass box. Raising Nebraska didn’t want to do things that way! And neither does Nanonation!

If you have any big red buttons that launch things like this – it’s time to upgrade! It doesn’t inspire excitement in visitors and doesn’t create the word of mouth that drives visitors over time. Our goal was to create an experience that would be fun for the visitor and at the same time deliver the information we wanted her to have. She would walk away having enjoyed her time with new knowledge and, hopefully, tell her friends about it.

The first step in our process was to find out what Raising Nebraska wanted the visitor to learn while interacting with the experience. It’s a first step we take in every interactive we put together. From here we seek to deliver a call to action and determine what should be the visitor’s next step. Although that is sometimes the case in our museum work, more often it’s a clear understanding of the knowledge we want the visitor to gain. Often it is an interpretive delivery related to a broader exhibit, but sometimes it’s a standalone interactive. In every case, it sounds like an easy task to identify what we want a visitor to learn from an exhibit, but it can actually be a detailed step. In the case of VRI, it was clear a user wouldn’t walk away with everything there is to know about variable rate irrigation. Raising Nebraska decided they wanted the user to understand how the slope, soil, and ground cover interact with the speed of the pivot to change the water absorption in the field.

Next, Nanonation went to the experts. The VRI display was sponsored by Reinke, a Nebraska-based company who produces center pivot irrigation systems. Our design team spent time with the engineers at Reinke to find out how VRI worked, what factors were involved in the process, and what the farmer and pivot did differently to apply the concepts of variable rate irrigation to their field. Reinke also provided a fantastic centerpiece to the exhibit in the form of a single span of an actual center pivot, which would mean our interactive at the base would see a lot of traffic!

Nanonation’s award-winning design team then went to work. They put together several concepts to review with Raising Nebraska. After this initial review we decided to build a touch screen interactive game in which a visitor would control the speed of a center pivot irrigation system through growing season to see how efficiently they could apply water to their field.

Once we had our direction in place our design and our project management team held design review sessions with Raising Nebraska to finalize the look and feel of the interactive. Each of these sessions helped to narrow down the deliverable to ensure it suits its purpose and blends in with the look and feel of the overall environment. In this case we also incorporated a portion of these reviews to include the corporate sponsor since their name would be included in the interactive. An open approach with regular communication during this phase ensured a final product that meet the client’s goals and has buy-in from all relevant parties.

After design sign-off, Nanonation’s development team created the interactive experience on top of our core Nanopoint software platform, which provides all of the screen controls, remote support, and adds an attract loop to the interactive screen (which can be used to promote the exhibit itself, further advertise the sponsor, or both). The design and development, once completed, were fully tested by Nanonation’s quality assurance team before being delivered to the customer site and installed on the kiosk.

The final product is significantly more entertaining than a big red button that launches a video! Young and old alike line up to play the game. Here’s what happens when you play:

The whole experience lasts less than two minutes but in that time the visitor learned a lot about VRI. They learned, fundamentally, that the speed of the pivot could be changed which in turn would change the amount of water applied to an area. They learned that water has a different absorption rate based on soil type, slope, and ground cover. Finally, they learned that the proper application of water could have a positive impact on crop yield. They learned all of the fundamentals of variable rate irrigation and had fun doing it!

The impact of the interactive has been great. Nearly a million visitors have been through the exhibit hall to learn about VRI since the exhibit opened. It’s one of several great experiences at Raising Nebraska and good exposure for Reinke as a corporate sponsor.

We can’t say for sure if more people have learned about variable rate irrigation than would have if there were only a big red button to press, but we’d like to think so.