In 2015, Nanonation created a digital timeline for the Nebraska High School Sports Hall of Fame Foundation. The timeline is a series of five touchscreens that outline the history of Nebraska sports dating all the way back to 1854. Users are encouraged to touch one of the photos, videos, or news articles to view footage or read about the event.

After several years and a number of digital experiences later, Nanonation once again partnered with the Hall of Fame to create a gesture-based, multi-player game for the volleyball area within the Hall. The physical space at the Hall of Fame sets the scene for the interactive game, it even has volleyball court flooring! With that in mind, Nano worked to blend the new experience with the existing space.

Nano proposed the concept of a 2-Dimensional educational game that is powered by Microsoft Kinect, a motion-sensing device that supports the interactive aspect of the experience. The team also integrated the current projector in the exhibit to adapt to the environment.

The game takes place on a volleyball court with the Hall of Fame’s logo in the center. When a person enters an unoccupied quadrant, they are randomly assigned an avatar. Each avatar is a stylized female volleyball player inspired by women inducted into the Nebraska High School Sports Hall of Fame.

The avatars sport an animated version of a player’s jersey, featuring the number each player is most commonly associated with. Alternatively, characters that are in use will have a superimposed photo of the user’s face onto the body of the avatar.

As the user walks, jumps, or stands still, the avatar will mimic the movements via Kinect. Users have three hits per side, can spike by raising one hand, and can set by raising both hands. Between every volley, the user is prompted to serve the ball to begin the game by raising their arm.

After a volley, an overlay pops up with alternating cards. The first card displays a profile on an inductee, including Allison Weston #18, Jenny Kropp-Goess #17, Nikki Stricker Best #12. The other card has facts about volleyball and a “pro tip” to help you play the game.

The experience is not only a way to engage visitors, but it also honors the inducted athletes in an educational manner. Executive Director, Chuck Johnston said, “I think this is the best experience yet from Nanonation.” 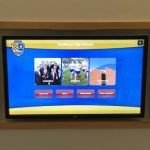