Have you ever wondered what it’s like to have a Drill Sergeant yell orders at you like a soldier? The “I Am the Guard” exhibit at the Nebraska National Guard Museum in Seward, NE will give you a peek into what life in the military is all about and the history of the National Guard in Nebraska.

We developed three separate digital experiences for the museum to help visitors and recruits gain a better understanding of the National Guard in Nebraska.

The first installation visitors encounter is a portrait-oriented video wall featuring the National Guard crest. When triggered by movement, a

video of a Drill Sergeant emerges and begins to give orders to the visitor, which sets the scene for their visit to the exhibit. Visitors are even instructed to line up at attention before moving on to the next stage of the journey around the I Am the Guard exhibit.

As visitors move through the space they come to a set of three screens displaying general information about the National Guard. Each screen

plays information on one of three areas of current concentration for the center: Army Guard, Air Guard, or the 20 Year Project. Nanonation’s digital software powers a set of videos and images on each screen which demonstrates how important the Nebraska National Guard is to our state and country.

Museum-goers now have the opportunity to learn about the National Guard, its history, and its significance in Nebraska through digital experiences that complement the physical artifacts.The last experience in the exhibit is a series of three touchscreens that allow users to navigate through information on notable Nebraskans who have served in the Guard and their history (including Warren Buffet). The clickable floating tiles open up an informational card with related text, media, and quizzes.

Watch the video below to see one of the interactive experiences at the museum! 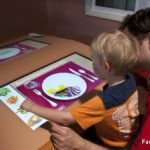 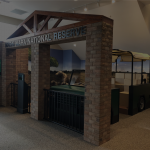